The latest update also brings Supernatural Avengers Outfit Set featuring, Thor, Iron Man, Kate Bishop, Hulk, Ms. Marvel, Black Panther, and Black Widow in their own spooky attire. All these outfits are inspired by classic Halloween concepts like a jack-o’-lantern for Iron Man and a vampire for Kate.

Apart from this, Marvel’s Avengers version 2.0.4 also includes several stability fixes which you can find below in the full patch notes.

It’s a season of fright, a season of night, a season with lots of sweet bites! Returning for this spooky season is the Cosmic Threat Event, complete with new rewards that will keep your mind content. From the 21st of October to the 4thof November, special mission chains will appear if you remember. Prepare to get gear for the event draws near during the scariest weeks of the year.

New this time is Thor’s Stark Enhancements Outfit, which you can earn by completing the main mission chain! Equip this outfit to stare straight into your opponent’s soul. Finally, we have some spooky nameplates to both earn and purchase.

We’re eager to start the information roll out for the rest of the content this year, but we’d would also like to celebrate Marvel’s Guardians of the Galaxy coming on October 26, so we’re keeping the landing platform clear for now. With that in mind, keep your eyes peeled come early November when we discuss the next update!

Captain America’s Capwolf Outfit is now available in the Marketplace. First appearing in Captain America #405 in 1992, Captain America briefly turned into a werewolf, but still retained his mind in order to complete his mission. We can’t wait to see a team of werewolves in the same Strike Team! We hear they work better in packs. 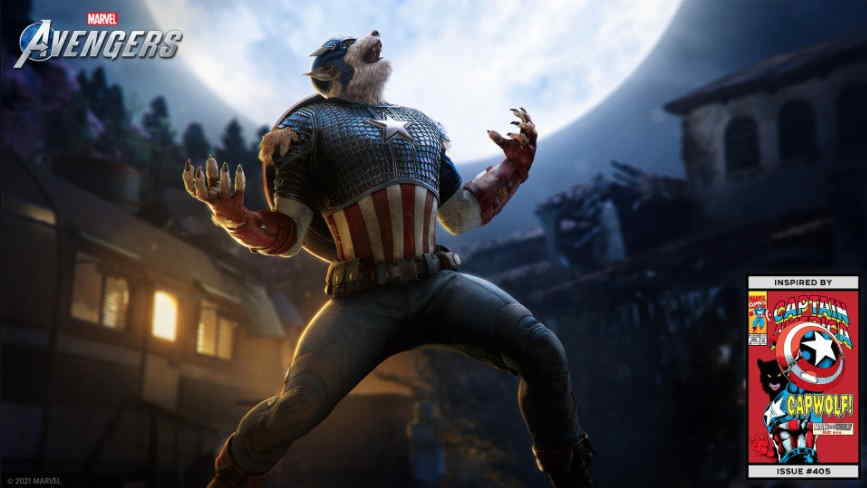 This frightful season also brings in the Supernatural Avengers Outfit Set, which features Thor, Iron Man, Kate Bishop, Hulk, Ms. Marvel, Black Panther, and Black Widow in their own spooky attire that is inspired by classic Halloween concepts like a jack-o’-lantern for Iron Man and a vampire for Kate. Can you tell what the other Avengers’ outfits are inspired by?

If you have a passion for RPGs and dungeon crawling, ...